I have wanted to post some pics of a Reno we have been doing, but wanted to wait until it was finished.
Well Its not 100%, but the main work is done.

In the Summer, we had our foundation sealed and weaping tiles replaced.  We don't get a lot of water in the basement, but enough that stopped us from finishing the basement.  It was an expensive job, but a necessary one.
After the installation of a sump pump for extra safe guards, the contrator began.

I can't find a real "before" pic but imagine this picture without studs and lots and lots of boxes and mess.  It was basically a square concret box with the stairs coming down on an angle where the laundry/utility room is. 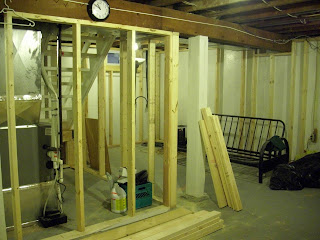 The idea was to create an "L" as a man cave and a smaller square as the other space.
Above you see the start of the new wall that will seperate the "L" and the square.

After all the studs were up, we waited for about a week for the insulation guy.  We decided to go with spray insulation, even though it was more expensive.  It is thinner for one thing - 2 inches on each side is a lot when you have a small house.  Was it ever weird to come home and see purple walls!! 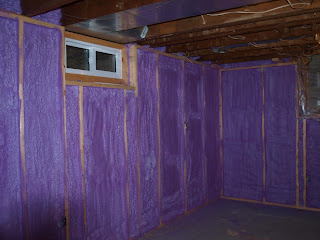 Already we noticed a difference in the warmth of the basement... it was amazing!
The rest of the job went by really quickly actually.  The contractor came back and put the rest of the walls up and also installed a ceiling and subfloor. 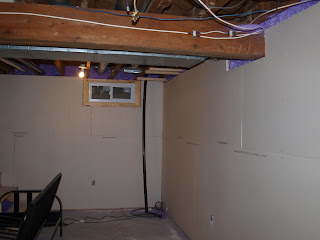 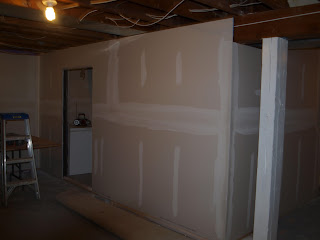 They also offered to paint since it would be an easy job before the ceiling and floor was installed.
And now, an almost finished "Man Cave".  As a side note, my husband is a big Ottawa Senaotors fan and that is why we have one red accent wall. - could be worse... he could have wanted a Star Wars themed basement! 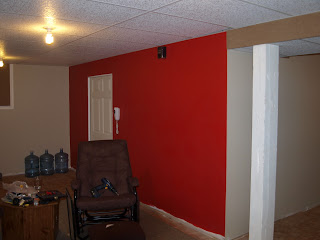 The red wall - Colour is "flaming sword" and is a really nice colour! - took 7 coats of paint though! 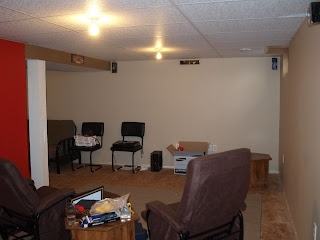 Last night after a long morning of Boxing day shopping, hubby started to install the surround sound.  His big ass 55 inch TV arrives on Wednesday - They were sold out before we even got in the store, but Future shop ordered one from the warehouse for the same door crasher price.... nice!
You might also notice 2 chairs... yes I said 2.  He got one for me so I can watch movies with him... such a nice guy!
So all that is left is a nice floor, trim, and accessories.  We are attending a SENS game on the 14th of January... I expect to come home with more stuff then we go with!
Posted by Bonnie Brown at 10:44 AM

wow, great work on the man cave Bonnie. It will be wonderful done. We are getting a BA 55" too on the 5th.It will stay in Ottawa until we get home in the spring.

Looks great!! Is there a stitchy room as well?
Judie

What a great space...does that mean upstairs can become more stitch friendly if he is going to be in the cave? Just wondering, it is a lovely looking way to use the space downstairs.

Looking good You will love the big TV and nice colour I love the RED!!!!