For 2011 Christin and I are doing Cirque de Cercles together as a SAL.  Dani is thinking about joining us later.
I am doing mine on Lemon drop lugana and using Ephiphany by Carrie's Creations.  I just LOVE using those threads!
Christin and I decided to post weekly on Saturday.  I didn't get a chance to blog on the weekend, but here is a pic of where my CdC was as of Saturday night 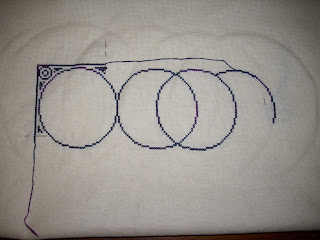 Cirque de Cercles
January 1, 2011
I continued to work on this on Sunday - I think I actually worked on it most of the day.  Here is where I was as of last night

Cirque de Cercles
January 2, 2011
These pictures do not do it justice at all so I tried to get a close up.  Still need to learn how to use my DSL properly.

Well, my dear hubby is sick so I think I am going to have a relaxing stitching night and make sure he rests.﻿
Posted by Bonnie Brown at 6:58 PM

Email ThisBlogThis!Share to TwitterShare to FacebookShare to Pinterest
Labels: CdC

hey Bonnie, if that was in red I would say it looks like Canadian pucks.....wooo hooo. This piece will be so pretty when you are finished
As always

Bonnie, this is awesome progress for just a couple days' worth of stitching! It's looking great!! Hope your hubby feels better soon.

The colours are fantastic you got so much done!

Way to go girl! What a beautiful color of fabric. Nice start.

You've been busy! I love the thread color.