A frog, an open house, and a finish

While at Rebecca's a few weeks ago I realized that I had two different dye lots for Cirque des Carreux!  I contacted Ann at Knowlege and Needles.  She said she had 6 skeins of Carries Autumn Leaves and would put them aside for me.  If it was one type I would have to frog about 1/3 out of what I had done.  If it was the other, I might as well start over.  Was I ever happy to see that she had the right ones I needed!!  On sunday, I frogged while I listened to a lecture.

What was left of CdCx after the frogging.
(less the re-start in upper left corner)
The whole top portion was completely stitched

Letter "L" for another stitcher. She is going to make these into a quilt. 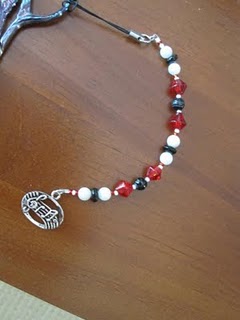 I also made one for Rebecca after she informed me I should make one for her back in June.
﻿
Well, that is about all I think for tonight.  Hopefully I can get back into posting more!  Hope you all have a great Friday and a even better weekend!
﻿
Posted by Bonnie Brown at 9:05 PM

Wow you have been productive...it was fun being at the open house on Sat.
A bit of advise..if you find you have a residue from pulling your threads out...use a piece of scotch-tape and put it on the fabric. I run my nail over it and it will take any dye or fluff that is left.

sounds and looks like a good day was had at the open house.

Love the colour you chose for your ink circles. Looking forward to seeing this grow.

Oh dear... I'm so sorry to hear you had to do all that frogging. :( I'm glad it was only part of the piece instead of the whole.

Sounds like it was a fun open house, and thanks for posting the pics of those beautiful cross stitches.

Your WIPs are looking great!

Oh those darn frogs!! They visited me again yesterday!
IT was a fun weekend wasn't it!

Thanks again for my beautiful scissor fob. It adorns my Dovo's

Sorry you had to do all that frogging - he's the most frustrating critter! CdeC is looking beautiful though - that floss is gorgeous. And congrats on the finish - I love the fabric.
Your beading is SOO pretty - I'm sure people are thrilled when they receive their gifts.

The floss you're using on your Cirques is gorgeous! I'm so glad that Ann had the right dye lot so that you could carry on. It's just too bad that you had to frog so much out.
The weekend looked like it was a blast! I can't believe the number of people that are attending now. Such beautiful work on display.
Your fobs are fabulous Bonnie!! Now I'm even more excited to see mine. Looking forward to seeing you this weekend.