I realized today that I have missed the March and April TUSAL updates.
Don't have a pic of march but since I am only 1 day late for April I took a pic. 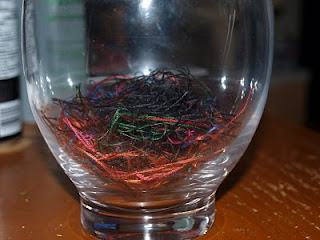 Ort Vase - April 15th, 2010
The black on top is from My Kaleidoscope.
I also took a pic of Kaleidoscope.  I am currently on page 3 of the black outline 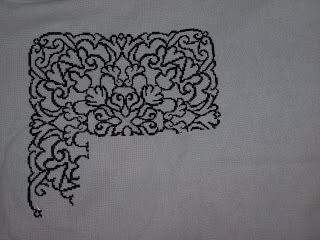 Ink Circles Kaleidocsope - April 15, 2010
That is about it on the stitching front.

Saturday night I got to do something I have wanted to do for a long time... attend a NHL game.  Bonus was it was the Ottawa Senators, who hubby and I cheer for.  It was an extra special night since they were celebrating Alfreddson's 1000th game.   It was a good game, but unfortunately they lost.
We then went to Dan'i house to stay the night and joined them for breakfast on Sunday morning.
I did manage to get a little bit of stitching done at her house on the Sunday.
All in all... a great weekend.
Posted by Bonnie Brown at 8:05 PM

Sounds like a fun weekend! Too bad the Sens lost.

Sounds like you had a lovely weekend. Kaleidoscope is looking good. :0)